It would be an understatement to say that in April, Ray was surprised to be his first cousin Donna’s heir. In his mother’s photo albums from the postwar 1940s, Ray appeared as a toddler, and this older cousin had stood over him in that summertime, casting a shadow. His mother had died at 69 in 1987, younger than he was in this August of 2014. Donna’s parents had moved from New York to Los Angeles in the early Fifties. In the past decade of social media, Donna had located more distant members of their scattered family, discovering they were a clan of only children. After Donna friended Ray on Facebook, there had been posts and messages and some emails, never Skype. He’d kept his distance, having no inclination to travel to California. Four decades of international business travel had extinguished wanderlust. Also, he agreed with John Updike: “The true New Yorker secretly believes that people living anywhere else have to be, in some sense, kidding.”

The legal document said that his cousin Donna’s estate included a painting by a major 20th century artist. Ruth Riesenkalmar’s work had finally emerged from eclipse by her husband’s, and the museum site of their house and shared studios on Long Island had been renamed, hyphenated to include her. After learning about the painting, Ray visited three Manhattan museums exhibiting Riesenkalmars. MOMA displayed two from her cephalopod series. A photo the lawyers sent showed Ray that his newly inherited Portrait of a Giant Squid was as color-saturated and indecipherably abstract as MOMA’s except for its dominant circular center entangled in wavy, sucker-circled lines suggesting a squid’s giant eye and tentacles. He could see from its dimensions it would be an ordeal to install in his apartment.

Read the rest of the story at: The Austin Chronicle. 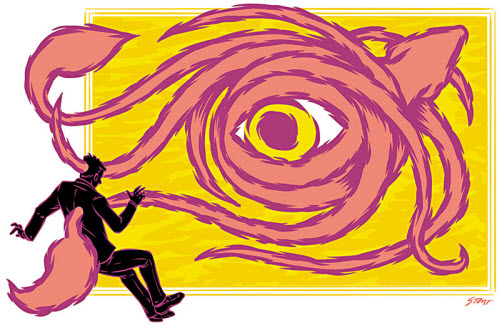 6 comments on “L. Shapley Bassen’s “Portrait of a Giant Squid””

This site uses Akismet to reduce spam. Learn how your comment data is processed.